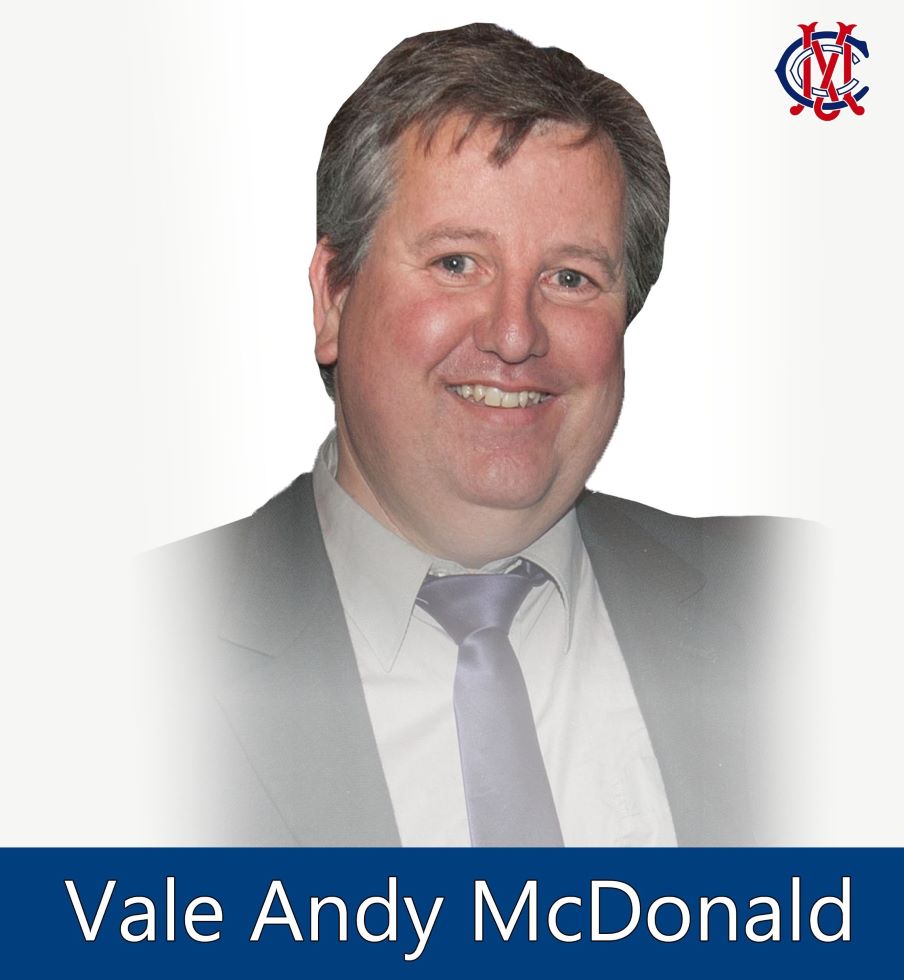 The MCC Hockey Section has lost one of its greats with the passing of Andrew McDonald – Andy Mc to all.  MCC Hockey was one of Andy’s great loves; he served the club with pride and loved nothing better than to be in the middle of a team belting out the club song.

Andy played his first game of senior hockey as a 14 year old, joining his father in the “Gentlemen’s 11” – or as Andy put it “the Olds and the Bolds” – in the late 1970s, and played his last game of hockey with men’s Metro B team on 1 August 2021, belting out the club song one final time after another win and taking his total senior men’s games to 692.

Andy gave a significant part of his life to MCCHS which was recognized with the awarding of Life Membership in 2015.  Prior to that, Andy had also won the David Pettit Trophy in 2011 (recognizing an “unsung hero” for outstanding contributions to the club), as well as the O’Sullivan-Stephens Trophy (for contributions to the men’s section) twice, in 2014 and 2000.  Andy stepped up to help out with managing the Men’s 1st XI in the early 2000s and was the MPL team manager through to season 2020.  In season 2021, Andy stepped up into the role of Assistant Coach of the WPL team.

Andy was also  an active member of the Men’s Sub-committee for most of his hockey career, taking on the role of Chair of Selectors for the Men’s Section several times when no one else stepped up to help out, coached the Men’s 5th XI for many years and was a huge supporter of junior players joining the senior section.  Andy not only coached within MCCHS, but was also involved with coaching at the junior State Championships, coaching premiership teams in 2009 (U14 boys) and 2010 (U15 boys).

We extend our deepest condolences to Andy’s sisters, Sue and Jan and to the wider McDonald family.  The club will be looking to celebrate Andy’s life and contributions to the club accordingly when it is able to do so.

“Andy was the epitome of a Clubman, striving to help the club in every way possible, through time, energy and an unparalleled passion for the club. Andy the Clubmate, team mate , European Tour mate and friend, you will be greatly missed.”

“Andy made me feel so welcome… and I will always remember that and be grateful.”

“What sadness. What a super man. Love to all at MCC and Andy’s family.”

“So sad to hear; he was the first person to greet us at the club when we came to a mcc hockey game”

“Always remember Andy around the club and supporting all the MCC teams. A huge loss to our club.”

“Andy was always ready for a chat and interested to hear in people’s news. He gave so much to MCC and was kind and inclusive to everyone.”

“Always willing to help out anyone in anyway possible… No ones heart bled more Red white and Blue than A-Mac!”

“An amazing man and club hero. Looked after everyone else and will not be forgotten.”

“Andy embraced the whole MCC Hockey Section. I remember him being very welcoming to the Nunna / McKinnon girls that joined MCC in 1989.
He is sadly missed.”

“Amazing man. Was always great to see at the games I umpired. Will be missed.”

“Andy Mc always made me feel so welcome at MCC hockey club. What a wonderful and upstanding human he was.”

“Andy was such nice bloke, always helping out, sometimes above and beyond, and always welcoming.”

“Captained and coached me for many many games. The hockey community has lost a true lover of the sport that gave everything he had.”

“Andy Mac… [was] MCC for me. I will always remember returning to Melbourne in 2008, walking into our club for the first time in many years and seeing [him] in the club rooms. Made me feel like I had never been away.”

“Andy embodied MCC. From my first days in 89 to [my son’s] first game in goals, his words and actions were only ever encouraging and supportive…”

“He will be dearly missed and many will have felt his support and encouragement at the club. Vale Andy Mac.”

“Andy was the kindest man, always making my family, and so many others, feel welcome at the club. He was so hard working and so passionate about MCC. A wonderful man who will be sorely missed. The club rooms won’t be the same without him there.”

“Andy is a legend and will also have a place in my heart.”

“Such a beautiful human. He will be missed.”

“Andy was a great person and a great club man.”

“Andy is not just a great MCC standard, but an amazing spokesperson for hockey. We will all be a little worse off for not having Andy in our frame…”

“A lovely welcoming person for our time at MCC.”

“From the time I was a little girl going to games with Dad right through to earlier this year he always took the time to say hello and speak with me. Hard to imagine the club without him.”

“Always welcoming, always there, part of the fabric of MCCHS.”

“Andy was a such great guy and gave everything he could for MCC hockey club. Will be sadly missed.”

“Andy was so kind and supportive, and always up for a chat and a laugh.”

“Andy Mc was always great to be around, a great club man.”

“Andy was the ultimate club man and supporter and so genuine. Always enjoyed catching up with him at the cricket or footy on the odd occasion we could get down. ”

“Andy Mac typified the words from our MCC Hockey club song ”Every heart beats true for the red, white and blue”. His passionate and self-effacing commitment in numerous roles for the MCC Demons spanned his entire adult life. Andy will be sorely missed around the club.”

“Andy Mac was an absolute legend of Vic Hockey and will be missed dearly by MCC. A genuine nice guy and I will miss seeing his smiling face at the hockey ground. ”

“A member of the group I regard as the “glue” of MCCHC. Vale Andy Mac.”

“Such a smiley and welcoming man when we first arrived from overseas and played at MCC.”

“He was the most loyal of servants. The most genuine of men. And the most red, white and blue of all. He would have been so humbled by these. ” 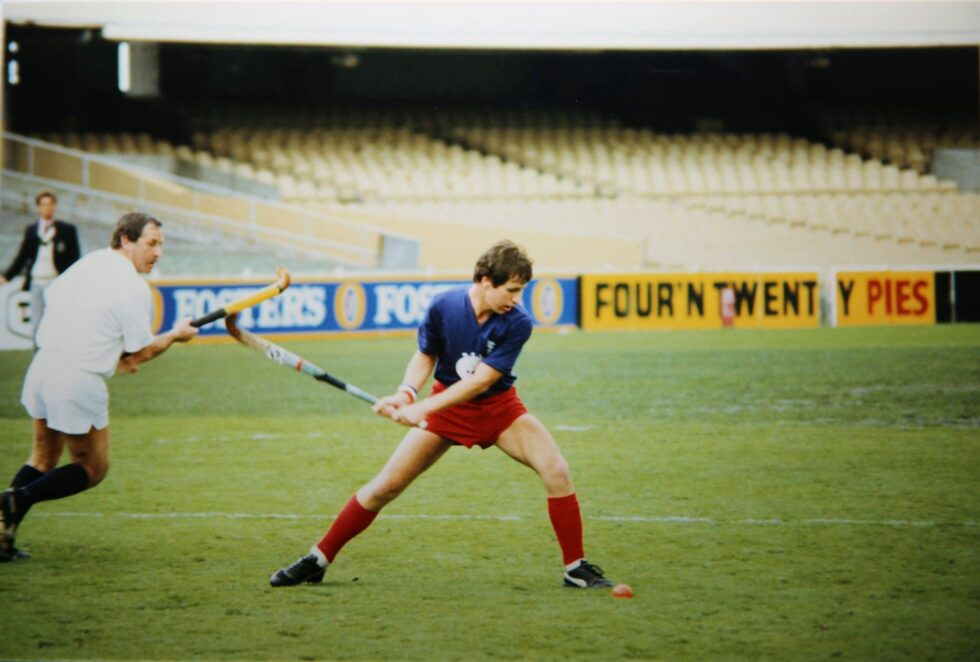 Andy playing at the G 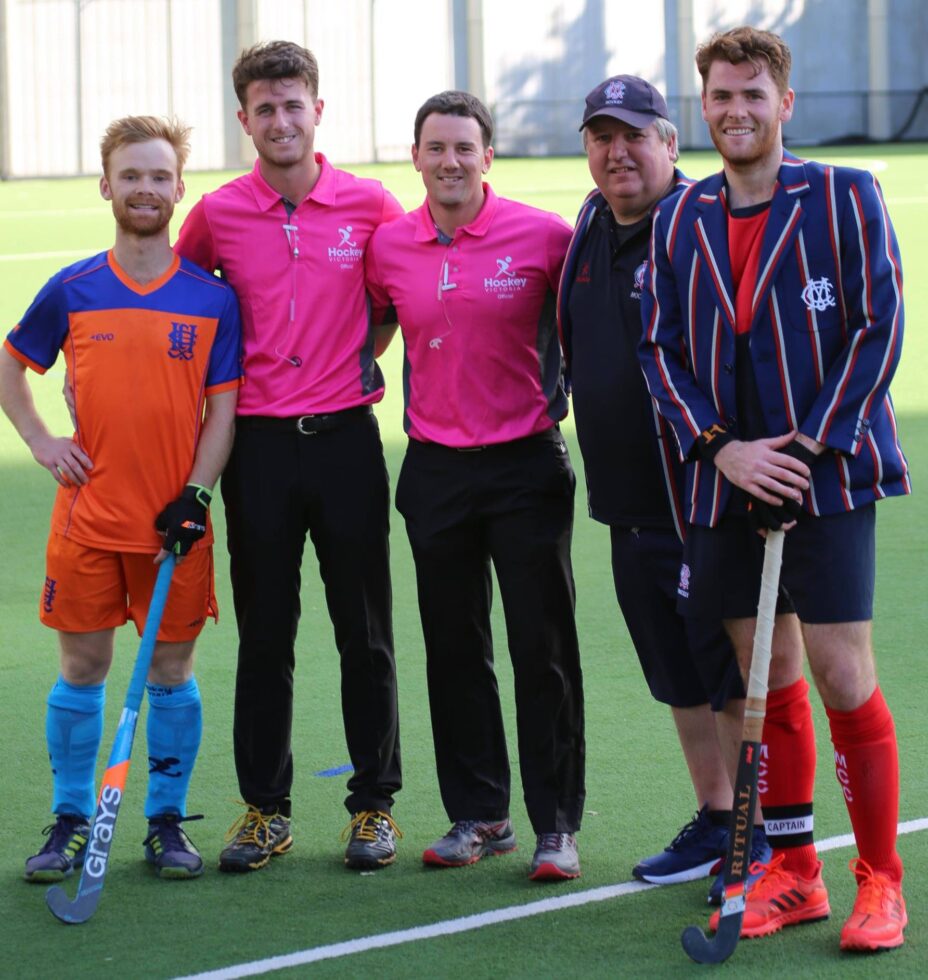 Andy on the pitch for the first ever Doc MacDonald Round in 2019, in honour of his father, whose legacy he proudly continued 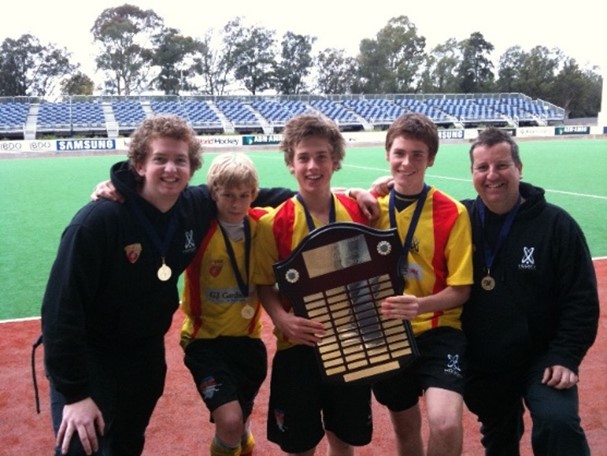 Andy in his State coaching days 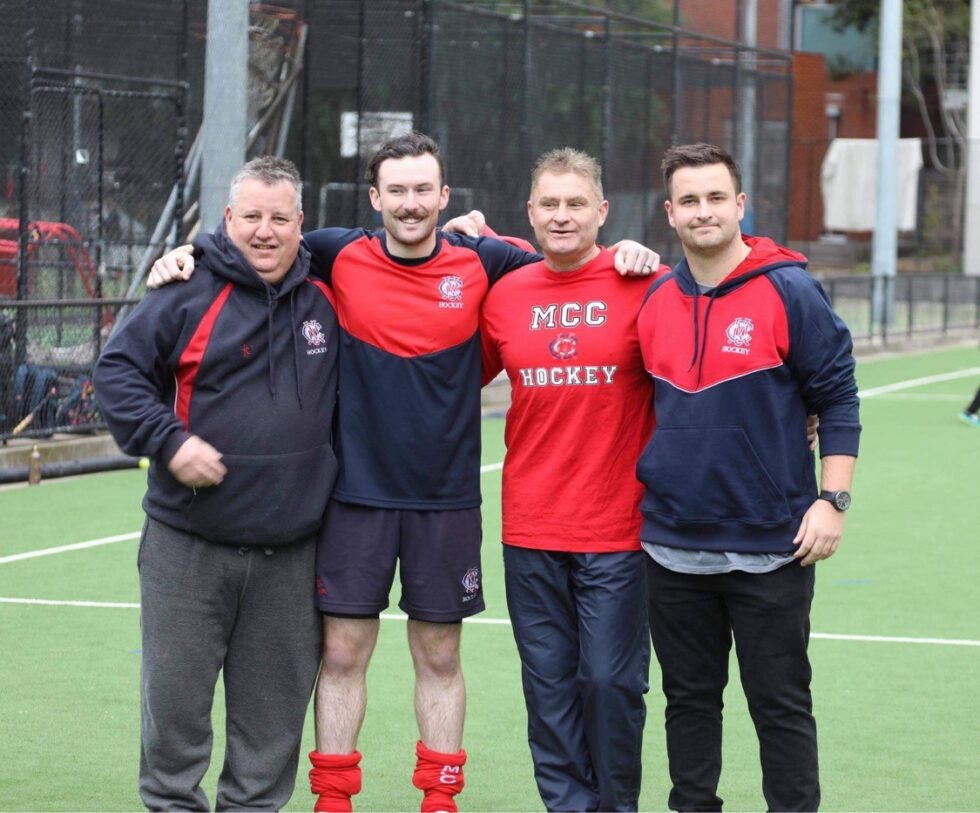 Andy with the Women’s Premier League coaching panel in 2021 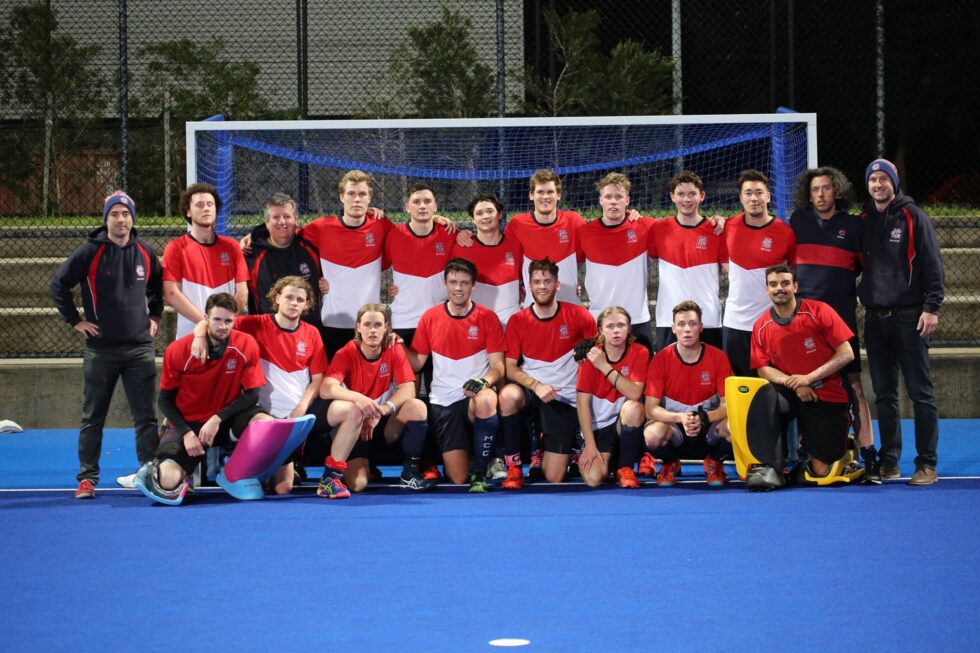